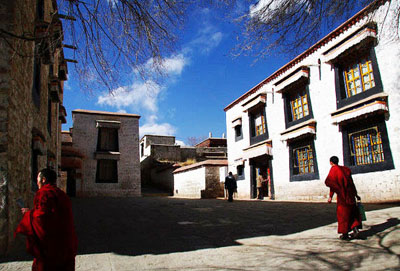 The Sera Monastery full named as “Sera Mahayana Monastery” is one of the 6 major temples of the Gelug Sect, known as “the Lhasa top three Monasteries” together with Drepung Monastery and Ganden Monastery, completed the latest among the three.

Developed over the centuries into a renowned place of learning, trained hundreds of scholars who attained name and fame in the Buddhist nations, Sera Monastery has under its affiliation 19 hermitages, including four nunneries, which are all located in the foot hills above Lhasa.
Its geographical location is at the base of Pubuchok Mountain, also known as Tatipu Hill, located in the northern suburb of Lhasa City, which forms the watershed of the basins formed by Kyi Chi and Penpo Chu Rivers.
The Great Assembly Hall, the ‘Tsokchen' or 'Coqen Hall', dated to 1710, a four-storey structure to the north east of the monastery, facing east, is where several religious rituals and rites are conducted. The hall measured an area of 2,000 square metres (22,000 sq ft) built with 125 pillars (86 tall and 39 short columns) and was constructed by Lhazang Qan.
There are three inner chapels, sequentially, are the Jampa Lhakhang, the Neten Lhakhang and Jigje Lhakhang.

Sera Monastery has long been the Buddhism preach place with a large number of monks and small temples around it. Built in 1419 by one of the Tsongkhapa’s eight disciples and completed in 1434, it is a complex of structures with the Great Assembly Hall, the dwellings in the eastern side and three colleges in the western side. Sera Monastery consists of three chanting halls including Sera Je College, Ngagpa College and Sera Me College. In its heyday, the number of monks in Sera Monastery reached up to more than 8000, slightly inferior to Drepung Monastery in terms of the scale.

The early buildings of Sera Monastery are centered by the Sera Me College and Ngagpa College, by generations of upgrading and expansion to today’s scale so that the layout is without overall planning. However, the buildings of Sera Monastery are close without squeezing, mixed without disorder, suit locally and with subjects isolated, reflecting the unique style of Gelug temples. It totally seems to be a religious city. Besides, inside of Sera Monastery stored tens of thousands of Vajra statues that are mostly made in local Tibet, as well as many copper Buddha from India or China mainland. The Great Assembly Hall and the Colleges all kept a large quantity of original murals, among which the Hayagriva Statue in the Great Assembly Hall is the most famous one.

There are mainly two sayings with regard to the origin of how Sera Monastery got its name: one story is that when people were laying the foundation of Sera Monastery, there was a heavy hailstorm. “Hail” pronounced as “sera” in Tibetan language, hence the monastery got its name after its completion, meaning “Hail Temple”. The other saying is that the temple was constructed where a patch of brier was blooming and “sera” is also the pronunciation of brier.

Unique Festival
Just like the Drepung Monastery will hold the Shoton Festival, people of Sera Monastery will also celebrate a grand festival called Bengqin Festival, sometimes known as the “Blessing of the Dagger of Exorcism”. The Sera Bengqin Festival is a typical religious festival held on December 27 of Tibetan calendar for hundred years. Rumor has it that at the end of 15th century, the Dagger of Exorcism was brought to Tibet from India and then shrined into the Buddhist Guardian Hall of the Sera Monastery. In the past, the Dagger would be taken to the Potala Palace for blessing offered by monk master on that day and then sent back. A general blessing was given to monks and whole communities. Every year during the festival, there would be thousands of Buddhism believers come to Sera Monastery from everywhere, waiting for blessing by hit their head.
Sera Monastery Highlights
Statue of Hayagriva: Arriving at Sera Monastery, here are some tourism highlights that you may feel regretful if you miss out. Speaking of the Buddha statues in Sera Monastery, the Hayagriva Statue is the most famous and the one that tourists must appreciate. In the Tibetan Plateau, there are a lot of Gelug temples holding Buddhism debating activities. Known as one of the Three Great Monasteries in Lhasa, Sera Monastery may be not as significant and luxurious as Drepung Monastery, however, the debate session here is absolutely a unique. The so-called Buddhism debating is a discussion on the Buddhism knowledge and also a way of learning for the monks. There is a Debating Garden in Sera Monastery, and monks can be seen preparing for monastic examinations by staging mock debates in the ritual way every day and it has become one of their daily activities. The Buddhism debating is a sort of challenging debate that debater would always resort to a variety of gestures to strengthen their debating. The monks would clap their palms to hasten their rival to answer questions as soon as possible or pull the beads meaning in the help of Buddha to beat each other.

Buddhism Debate Session: The debate session starts at 3pm every day (except Sunday) in the debating courtyard and is free for tourists to visit. It is suggested that people who would like to appreciate the debating get to Sera Monastery in advance but you need to pay for ticket to enter Sera Monastery which is 50 RMB per one. After getting into the monastery, the debating courtyard will be found walking straight along the widest road about 1000 meters, and you are able to enter the garden without extra fees. In addition, there’s no need to worry about the strong sunlight in the afternoon since numerous towering trees have blocked the glare and scorching hotness of sunlight on the plateau, instead, having made there a fresh and cool stage for religious activities.