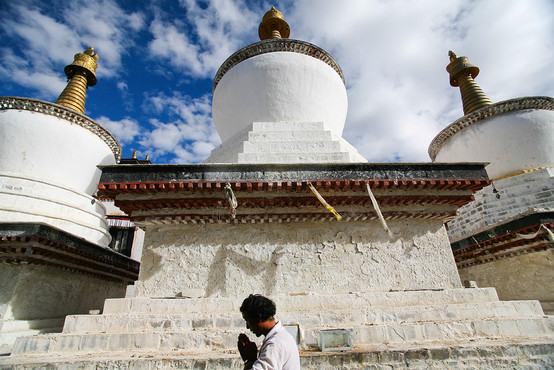 Tashilhunpo Monastery was founded by the First Dailai Lama in 1447, the First Dalai Lama, is a historic and culturally important monastery next to Shigatse, the second-largest city in Tibet.And the monastery's structure was expanded by the Fourth and successive Panchen Lamas.

Tashilhunpo Monastery is one of the Six Big Monasteries of Gelugpa (or Yellow Hat Sect) in Tibet.
The monastery is the traditional seat of successive Panchen Lamas, the second highest ranking tulku lineage in the Gelukpa tradition. located at the foot of Drolmari (Tara's Mountain), Shigatse, the full name in Tibetan of the monastery means: "all fortune and happiness gathered here" or "heap of glory".
The Maitreya Temple known as (Jambu Chyenmu) on the west side is the tallest building of the monastery.
In 1791 the monastery was attacked and looted by an army of Nepalese Gurkha warriors but were driven out by the Chinese who at the same time strengthened their control, over the temple and Tibet.
Since the early 1980s parts of the Tashilhunpo monastery have been open to the public and it is an important tourist attraction in Tibet today.