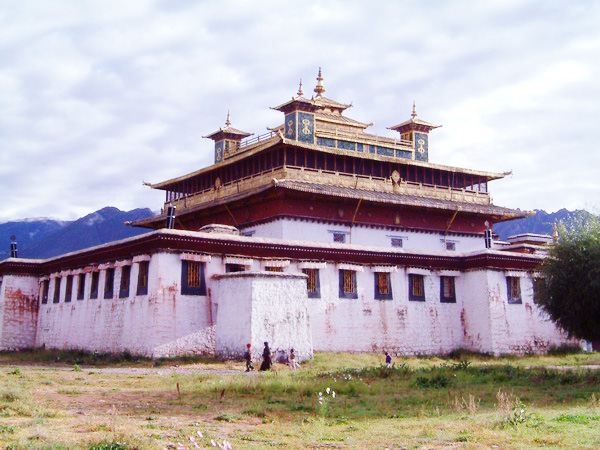 Trandruk Monastery as built around AD 617-650, under the reign of Emperor Songtsen Gampo.The name "trandruk" means roc conquering a dragon.

After it conveted to Gelupa, trandruk experienced a large-scale reconstruction.
It lies on the east bank of the Yarlung River,five kilometers south of Tsedang on the road leading to Yumbu Lakhang.
Trandruk is one of the earliest Buddhist monasteries in Tibet, having been founded at the same time as the Jokhang and Ramoche in Lhasa.
In the fifteenth year of Emperor Taizong's reign, King Songtsen Gampo returned to Lhasa with his Chinese wife, Princess Wencheng. Songtsen Gampo and Princess Wencheng, a Buddhist, always visited the monastery. During their visits to Trandruk, they lodged in an apartment, which remains to this day. However the apartment is badly in need of restoration since it is in poor condition. Princess Wencheng was fond of willow trees and had many of them planted around the monastery.
The most precious treasure in the Trandruk monastery -- a pearl Thangka,this pearl Thangka, it is also brought here by Princess Wencheng. It is made up of 30,000 pearls and hundreds of other gems like diamonds, sapphires, turquoise, rubies and amber. In Tibet, thangkas are frequently the center of Buddhist religious ceremonies. Pilgrims throw money to the thangka to show their respect.