On upstream of Turphu River, 4300 meters above the sea level stands the Tsurphu Monastery. It is located more than 70 kilometers far away from west suburban of Lhasa City. Known as the major temple of the Karma Kargyu sect of Tibetan Buddhism, Tsurphu Monastery initiated the world-renowned reincarnation system of Tibetan Buddhism and later this system was given extended application among entire Tibetan Plateau by other sects of Buddhism. Tsurphu Monastery faced south with the back to the north was originally built by the first Karmapa in 1189. There held a large number of rare cultural relics in the Tsurphu Monastery. For instance, the temple monument of Jiangpu Temple that is kept in the Tsurphu’s main hall is about two and a half meters in height and half a meter in width with ancient Tibetan languages engraved on it, hence taken on an important historical value for the study of politics, economy, religion, etc. in the Tubo period. 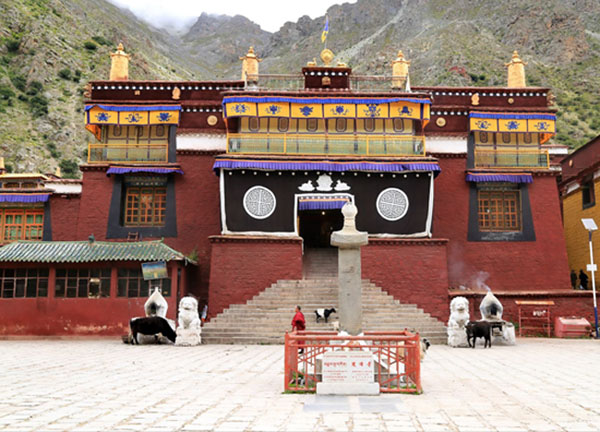 Apart from that temple monument, the silver statue that was sculpted by the eighth Karmapa in honor of his master has long been reputed as the treasure of Tsurphu Monastery. As per Tibetan legends, after its completion of this statue, it actually suspended in the air for seven days without any man-made forces. Thereupon, this statue got a reputation of “Buddha in suspended residence”. In addition, there is a spring surged out with its water looks very limpid and tastes sweet near Tsurphu Monastery. It is said that this spring was made by a Karmapa who applied magic and poked with his crutch into the ground in the past. Furthermore, on the Jiqinbo Mountain which is surrounded by Tsurphu Monastery also have a series of famous scenic spots, such as the celestial burial platform, meditation room, retreat hole of successive Karmapa and mantra words left on stone by the 17th Karmapa when he was praying turning around the mountain.

The large scale architectural complex of Tsurphu Monastery takes the main hall as the center of entire temple, including the scripture hall, prayer room, Dharma hall, Buddha institute, Practice Tantra Institute, private room for living Buddha and monks’ residence. Tsurphu Monastery sits north headed south fronting water and with hills on the back. There built a lofty Buddha exhibition platform on north the slope of the mountain, south bank of the river. Around the main hall are where 4 dratsang situated, formed a spectacular ancient monastery by building groups such as scripture hall, holy rooms, monks’ shelters and so on. 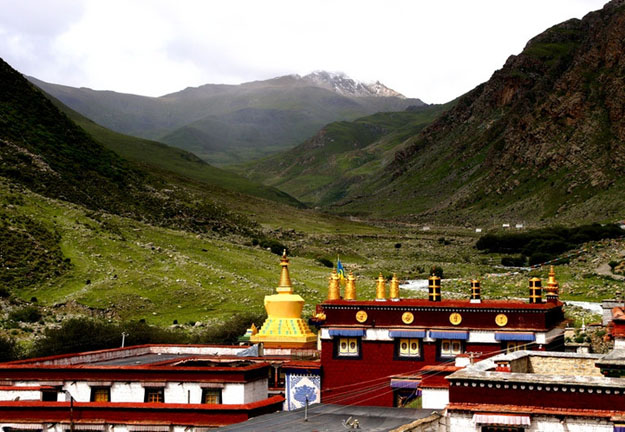 In front of the temple’s gate is a large square with an area of 1520 square meters. There stands a stela which is the Jiangpu Temple Monument in the center of the square. At the beginning of the ninth century, the Temple of Jiangpu constructed by a powerful minister of Tubo Dynasty has been damaged when Randama quenching Buddhism while the stela was completely preserved fortunately and been moved to Tsurphu Monastery. This precious cultural relic later became an evidence of the ancient history of Tsurphu Monastery and an indispensable historical data on the study of the politics, economy, religion and culture during the Tubo period. On west side of Tsurphu Monastery are two white stupas: one in the front is a stupa with square pedestal and bottle-shaped body while the one at back is square shaped in both pedestal and body with a design of primitive simplicity. There is another white building at the back of Tsurphu Monastery -that is called Zhuokang by Tibetans where monks of this temple carry self-cultivation and meditation. Generally speaking, the practice time is three years three months and three days. In addition, during this period, it was prohibitive for cultivator to go out or have any contacts with the outsider. The cultivator depended on food that was passed in from a window by certain people. Moreover, many other historic sites inside of Tsurphu Monastery involved the stone image of Karmapa worshipping Buddha and naturally formed stone pattern of goldfish’s pilgrimage as well as the cultivating cave for the first Karmapa on the mountain behind this temple. Besides, based on some sayings about the temple, the shank relic of the 16th Karmapa is now kept in Tsurphu Monastery as one of the rare and historically invaluable deathly hallows. What surprised the public is that after several years preserved in the temple from overseas in the year of 1981, a Buddha image of a quarter centimeter high appeared naturally on that shank relic. 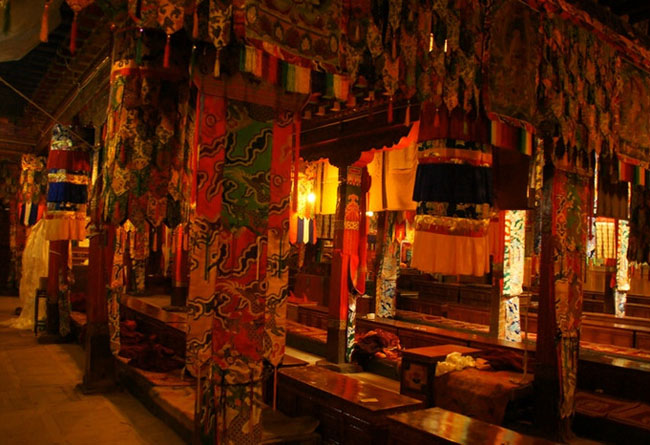 If you visit there in the right season, you may have the fortune to witness a primary religious activity, also a grand festival at the same time in Tsurphu Monastery. Since Tsurphu Monastery is known as the ancestral temple of Karma Kargyu sect of Tibetan Buddhism, a sacred dancing to deity ceremony will be held here in every winter and spring. This sacred dance performed by monks is a kind of traditional dance taken with religion meaning. Additionally, there will be prayer flags waving in the temple and some other large scale religious activities like the Buddha exhibition you can appreciate when you arrive at this temple.