Padmasambhava is the founding ancestor of Tibetan Buddhism, also the inherited founder of the Nyingma sect (Red Sect). Padmasambhava was born in a country (today’s Pakistan) in the west of India. When he was young, he was adopted and raised up by the King Indrabhuti as prince. He was named as “Padmasambhava” since he was born in a lotus in the lake. Afterwards, he went to Bengal and became a Buddhist when he grew up. After studied countless Buddhist classics, he traveled everywhere to educate people who have an inter-involvement with Buddhism into Buddhists. At that time, he is reputed as the “King of the Lotus.” 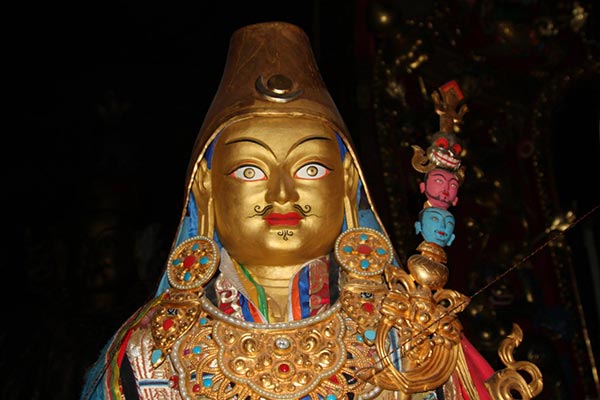 In the year of 755, Tibetan King Trisong Detsen believed in Buddhism so that he particularly sent an envoy to India to invite Padmasambhava to Tibet to translate the theory of Buddhism and propagate the Dharma. Additionally, the Samye Monastery filled with three kinds of styles-Tibetan style, Chinese style and Indian style was also constructed at this time under the help of Padmasambhava. This monastery was originally built to preach various theories of Buddhism to believers and followers like Trisong Detsen and his princess. Moreover, it was also in this period that created the Tantric Dojo as well as the Exoteric Scholasticism, which has laid the foundation of Tibetan Secret Mantra. In the Tibetan history, later generations of Tibetan believers honored the Akamatsu Toku, Guru Padmasambhava together with Shantarakshita as the “Master Three.” 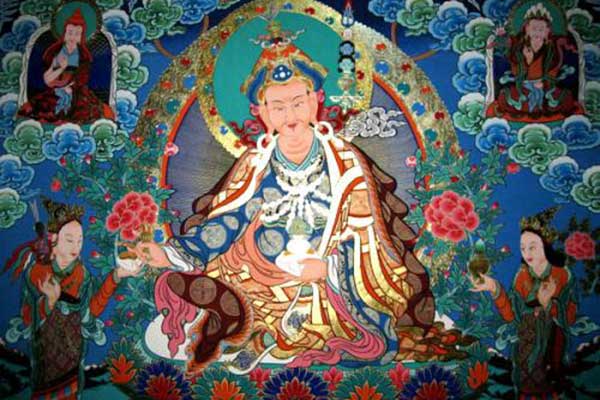 Padmasambhava: wearing a lotus hat, a shirt inside, a robe outside and a half-moon like brocade cloak. He has the most beautiful pink-and-white complexion and is seemed well-educated and trained in military exercises. In his right hand is held a Vajra with five sharp tips while in his left hand is placed an inserted life bottle. There was a celestial staff in his left elbow, represented a king-sitting.