According to Tibetan calendar, April 15th is the day for a special festival of Tibetan people-Saga Dawa Festival, referring to one of Tibetan 28 constellations. It is also the date when the founder of Buddhism Sakyamuni was born, became Buddha and die and when Princess Wencheng married to Tibet as well. Moreover, it is the most distinctive festival during spring season in Tibet.

On that day, there is a large number of people flooding into Lhasa streets and praying around the Jokhang Temple and outer wall of the Potala Palace so that the three main praying routes are full of Buddhists. In the entire Lhasa City is pervaded a strong flavor of various incenses. Therefore, a wide variety of activities will be held to commemorate on that day and these activities turned to a large scale of circling mountains activity in the course of time. 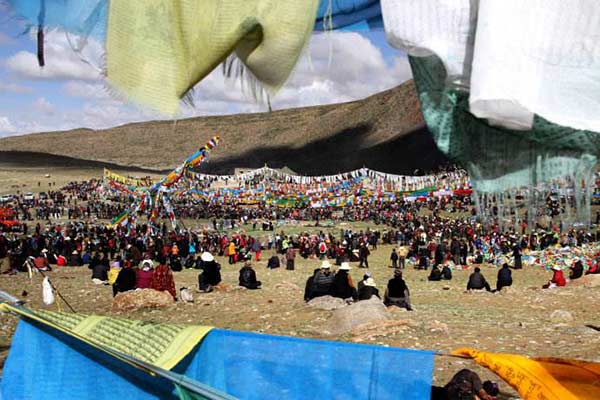 It is said that Sakyamuni Buddha was born on 7th day of Saga Dawa month of Iron-Monkey year and on the 15th day, Saga Dawa month, Wooden-Horse year, he sit under a large banyan tree, meditating faced the east. He would subdue the evil in the dusk and process enlightenment in the dawn. He died also on the 15th day of the same month in the Iron-Dragon year. Later on after Sakyamuni became a Buddha, people regarded Saga Dawa month as the most fortunate and the general public will carry on assorted Buddhism activities on the basis of Tibetan customs.

Pilgrims do kora around Mt Kailash

According to Tibetan traditions, killing and absorption of meat are prohibited in the first half of Saga Dawa month. Thousands of offerings will be respectively contributed in Jokhang Temple, Ramoche Temple, and Potala Palace, etc. with the main Buddha gilded and burning Buddhism lamp enshrined in front. 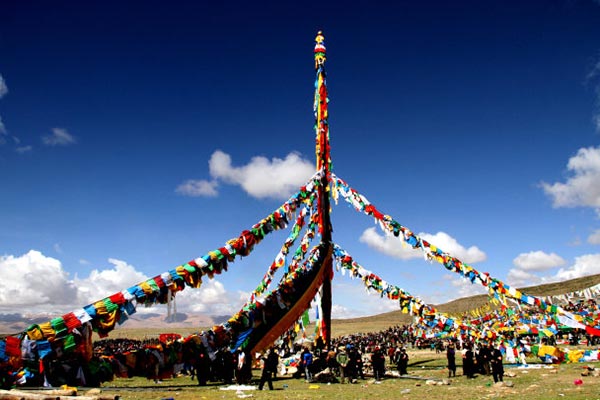 On the morning of 15th, believers firstly hold ceremony in Jokhang Temple and Ramoche Temple like contribution of Hada to Buddha. After the ceremony, they go on pilgrimage along their usual path, passing through Norbulingka, Potala Palace and arrive at Dragon King Pool by noon. Buddhists pay pilgrimage while burn incense to worship deities on the Mani Stones and show mercy to beggars on the way. Pilgrims taken with yak buttered tea, Chang, and food start a leather boat trip and feast on the lake. After the boat trip ends, they continue their unfinished pilgrimage path.