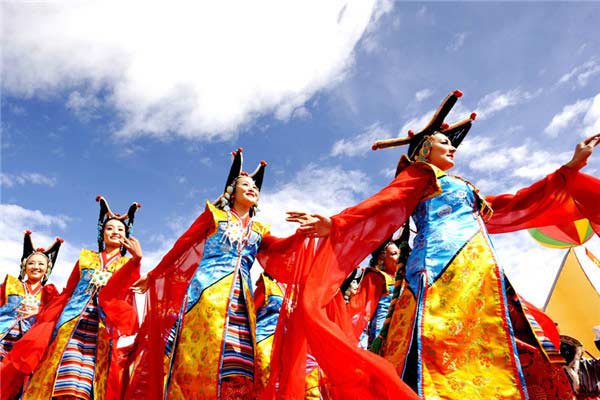 Before 17th century, Shoton Festival in Tibet was completely a sort of religious activity. On the basis of Buddhist regulations and disciplines at that time, dozens of days in summer were banned for monks to go out until the deregulation. In the opening days, monks all went out of the temples and got down the mountains. Secular people would prepare yogurt for charity then, which is exactly the source of “Shoton”.

By the middle of seventeenth century, more Tibetan Opera performances were added into the festivities and gradually formed the “Shoton Festival” of today. On the other hand, religious and cultural activities are still limited in and out of the temple while it is centered in Drepung Monastery of Lhasa City. At the beginning of 18th century, Norbulingka Palace was constructed as the summer palace of Dalai Lama. Hence, Shoton festivities began to move to Norbulingka. Citizens as well as people around the park are allowed to enter Norbulingka to view Tibetan Operas, which gradually formed a set of fixed festival ceremony. 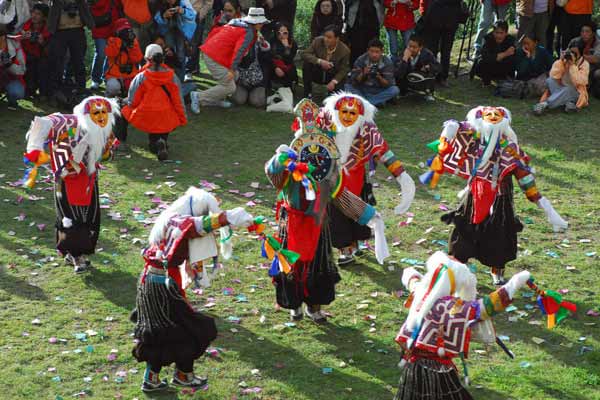 In the past, the way Tibetans celebrated Shoton Festival always in the way like this: June 29th based on Tibetan calendar, Tibetan Opera Troupes from different places registered in local government at Potala Palace in the morning and held a simple ceremony. Then they went to Norbulingka to greet Dalai Lama and turned back to Drepung Monastery in the evening. On each June 30th, they would perform the operas a whole day long. On July 1st, opera troupes of various places would have a joint performance at Norbulingka Park. From the second day to the fifth day of July, troupes of Gyantse, Ngamring, Namling and Lhasa would each perform for one day at a square in turns.

During Shoton Festival, local government would have a holiday and all officials would concentrate in the Norbulingka, accompanying Dalai Lama to view Tibetan Opera. The government would host a banquet at noon to treat all officials, and yogurt was a must of this banquet. The Lhasa citizens together with farmers of suburbs also dressed up, taking with food and drinks to view the performances in Norbulingka.

Great Buddha Display: As the prelude to the Shoton Festival, Great Buddha Display in the Drepung Monastery is the ceremony that draws the most attentions. At 8 am, on the hillside behind the Drepung Monastery, a giant Shakyamuni’s image reaching 500 square meters’ large, weaved by colorful silks slowly showing his auspicious appearance with dignified and solemn Buddhist sound. Tens of thousands of believers together with deeply infected tourists all fell down in adoration before Buddhist image with folded hands. 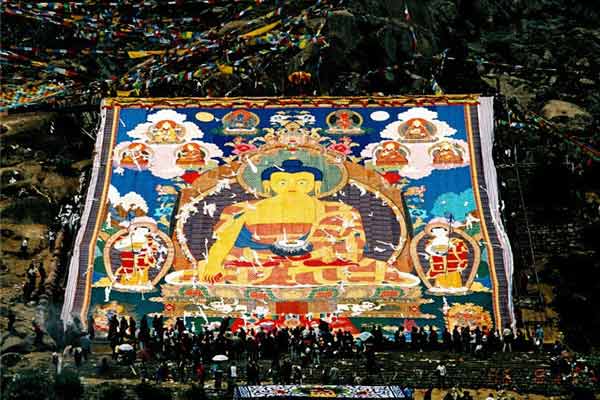 Great Buddha Display at Drepung Monastery
Tibetan Opera: Another highlight of Shoton Festival must go to the Tibetan Opera. From the second day of the festival, non-stop Tibetan Opera will be performed from 11 am till twilight every day at the Dragon Lake Park across from Norbulingka and the Potala Palace. It is said that due to limited time, this performance has been the essence part extracted from repertoire. Otherwise, only a single play can take a dozen days and both performers and viewers enjoy themselves a lot.

Kadians are spread all over on the grassland with highland barley wine, yak butter tea and a variety of Tibetan snacks put on Kadians while relatives and friends leisurely sit together, watching Tibetan Opera, turning prayer wheel or twist beads.

There are a wide variety of stories sung in Tibetan Operas such as “Nosa Buddha”“Princess Wencheng” and so on. Additionally, the resounding and touching melody, cadence monologue, magnificent mask and solemn ancient costumes as well as graceful dance all exudes a unique charm of nature after a history more than 600 years.