When you think of Tibet, the first colors that strike your recall might be a distinctive mixture of white and red. It is the everlasting snowy mountains and the myriad imposing buildings with the Buddhists and people in robes that are colored in the typical white and red. Along with the flowering meadows and deep valleys, Tibet has also a rarely revealed delicacy.

When the touching scene reaches us, whether we are photographer or amateur, the mutual wish to capture and keep the moment leads to keenness to press the shutter buttons. 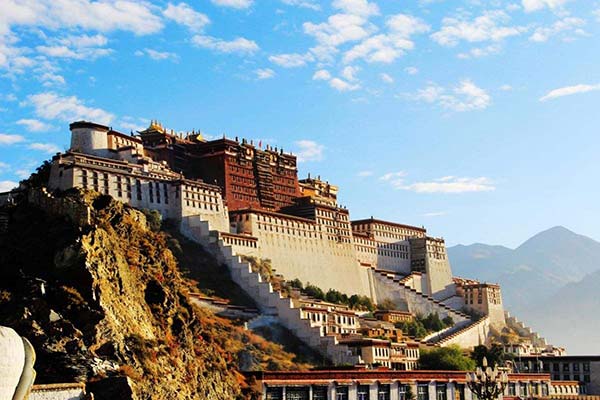 To restate the uniqueness and harshness of Tibet’s plateau climate, may give the visitors a basic idea about what to prepare for the photography tour. And some extra surprise that shooting in Tibet can provide you may bring a smile to your lips. Details are as follows.

Are you traveling on your own enjoying the solitude and tranquility? Or you are going on a honeymoon with the one sharing same admiration to Tibet? Maybe you are the guide of your family taking care of them on this journey? Traveling with different partner may lead you to destinations with various themes. Miss out not the stunning pre-wedding photography venues in central Tibet and the most seniors-friendly and kids-friendly touring prefecture of Nyingchi in southeast Tibet.

Pre-Wedding Photography in Lhasa or around

The bond of knot-tying has the witness of adorable mascots and the best companion of still mountains and peaceful lake. Into the wild, the composure from being disciplined in the busy society may unconsciously flap the wings of playful vividness. The precious love and naivete is as pure as the wilderness. Serenity of the lake and mountain delights the loving hearts more dearly. Gratitude softly touches the souls because of the humble canvas that the land offers.

Emerging in the most genuine people, walking hand in hand around the holy city of Lhasa, letting the strong sunlight kiss you with a tinge of plateau, you may appreciate how the brightly colorful the Tibetan robes are! Humble robes, exquisite set of Tibetan costumes and ornaments, are all stunning with the most enthusiastic colors and bold unconstrained patterns.
Let’s take no rush in selecting an outfit to be joyful admirers of Tibetan dress and robe. 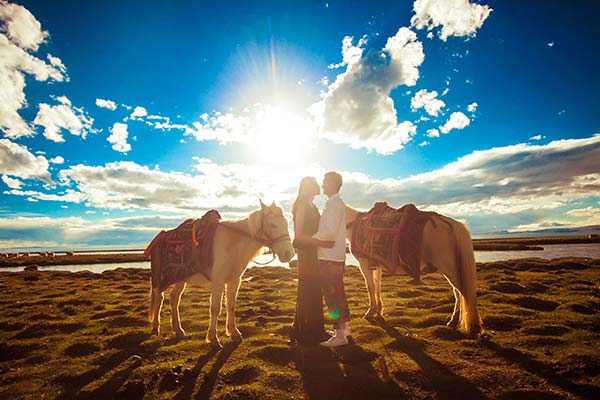 You can easily find art photography companies online providing pre-wedding shooting services, most of which offer photography tour package includes the transportation, the gowns and suits, the photographer team and make up service. However, if you have a professional photographer, you can hire a set of Tibetan costumes in Barkhor street, the oldest traditional market in central Lhasa.

Though wearing what Tibetan brides and grooms wear in Tibet will be a special experience, you can also have some photos taken in the clothing that can mostly tell who you always are. The beauty of Tibetan architectures themselves are perfect enough for an exotic beauty. In your normal outfit, some natural images of you and your loved one can tell the story years later. Whether you adore a rustic style, a glamorous concept or an indigenous experience, Tibet won’t let you down.

Best season: to avoid rainy season and high season of tourism, then May and June remain the best choices to set your pre-wedding photography trip. In May the average high temperature in the daytime can be 20 and the lowest at night around 4℃；slightly higher in June, the average high in the daytime is 23℃ and the lowest at night 8℃. The bride-to-be and the groom-to-be won’t get frozen. Because you know how being beautiful costs you by the slim gowns or suits.
Best venues: Potala Palace, Barkhor Street in Lhasa; Yamdrok-tso Lake, Namtso Lake
Styles: rustic or noble, fancy or casual
Shooting etiquette: keep the blessing of engagement in a decent way, discuss with the shooting team, try to minimize the inconvenience to the residents and other tourists; 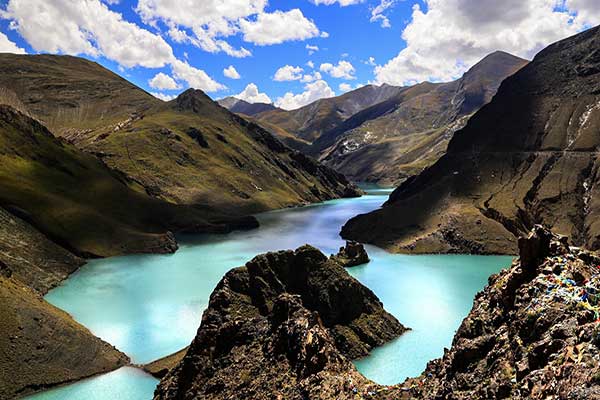 View of Yamdrok Lake in Tibet

Nyingchi, the southeast prefecture of Tibet, is the most family-friendly tour spot in Tibetan area. The average altitude here is 3100m, which is the lowest in Tibet. Though still higher than where most tourists come from, the abundant forest coverage and the mild climate influenced by the Indian Ocean current, gives Nyingchi a comparatively high oxygen concentration of 84%, higher than that of the other places with the same altitude. Thus, altitude sickness are less likely to trouble your seniors and kids. Accommodation in Nyingchi comes with comfortable class and Luxury class to ensure a pleasant and relaxation stay. To record the precious moments of family reunion, here follow my notes on photographing in Nyingchi.

Best season: March, April, May, June. Spring and early summer are far beyond reach of heavy downpours. Nyingchi turns herself into a botanic garden with peach blossoms in March and April. May and June wake up the alpine azeleas, refreshing from the foothill to the deep forest. Depending on how fit your families are, you can choose to enjoy yourselves in the villages of peach blossom along the river valley, or extend your exploration into the forest’s tracks. The iridescent Nyingchi can offer not only a wild natural garden, but also get the kiddies outdoor to play and learn, give you the chance to capture the lively childhood photos and befriend the old ones in your family by listening and companionship.
Tour pace: easy and pleasant
Distance from Lhasa: 400km
Transportation: multiple domestic flights into Nyingchi Mailing Airport from Chengdu, Guangzhou,etc.
Shooting tips: light weight camera or just a good smartphone with ample storage capacity is suggested. Trust your techniques by doing some research on composition, light, and high-speed shutter and don’t exhaust yourself by heavy and excessive photography apparatus. 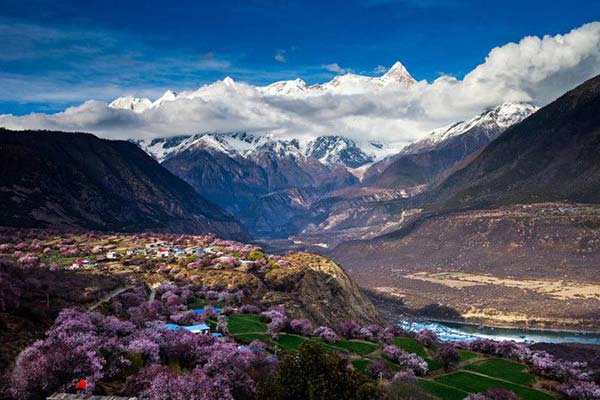 View of Nyingchi in Tibet

General Tips on Photography and Protecting your Cameras

Recommended Months for Shooting
Rainy Season in Tibet is from June to September. Winter with heavy snow ranges from December to February. Wind Season has major parts overlapped with winter, spanning from December to May. Shooting in Lhasa is believed applicable all year round. While if you are serious photographer after some masterpiece taken in Mount Everest, then May and October are the best time, with rare rain, a clear view of the World’s Highest peak can be more probably captured.

Protecting Cameras from UV
A UV filter is an essential equipment for photographing in Tibet. Mostly it’s because of the enormous UV radiation in the outdoors of Tibet Plateau. Besides, it shields your lens in a multiple way by blocking dust and dirt, preventing droplets and snow from permeating inside the body, and can even reduce the harm from any unexpected bump. Moreover, to replace a damaged UV filter is much cheaper than purchasing a new lens, which makes it a cost-wise must have.

Shooting in Changeable Light
The weather in a day of Tibet cannot be summarized as steady. Strong direct sunlight at noon makes a lens hood vital. A polarizing filter can effectively help reduce the impact from the complicated reflections, therefore the fidelity of the landscape can be maintained in a photo.

Equip Cameras for Low Temperature
The low temperature in winter of Tibet is the main hazard for cameras. The temperature difference between day and night can be 15℃. Although low temperature is a test for cameras. Most cameras are designed to be fine in the temperature range above -40℃. And if it comes to lower than -20℃, various function failures would occur. However, take the temperature of Lhasa as an example, the lowest average in January is around -10℃. So, it remains not a big problem apart from the fact that most tourists won’t travel to Tibet in winter.

Keep the camera body warm enough with a camera bag. And to be cautious with condensation is the most important part. Low temperature often brings fog and mist outdoors, the potential harmful factor. When you go indoors with your photography equipment, the condensation will threat as the biggest enemy of your camera. The warm moisture indoors will condensate on the surface of the lenses and image sensor, resulting in full coverage on the lens, as well as on other electronic elements. If they are not tackled quickly, the water stains and mould would destroy the lens. When shooting outdoors, wrapping the camera in a waterproof cover can prevent the condensation. It also helps a lot in the rainy season and wind season in preventing water and dust.

Most batteries are intolerant to the low temperature, especially in the morning and night, including acid batteries, alkaline batteries, nickel-cadmium batteries and normal button cells. Using these types, extra preparation and keeping them in proper warm storage are vital. In contrast, lithium battery is relatively tolerant to low temperature and can be more reliable.

Ask politely whether you’re permitted to shoot a specific scene or event, especially related to religions. Accept in a decent manner when your wish meets a refusal. To take photo inside a chapel, a shrine or any non-public area of a monastery is regarded as disrespectful.

Drones with cameras are banned in most area of Tibet. Although in some occasion, you can fly them in an open scenic spot. You shall consult about the allowed flying height, which is believed usually not higher than 200m.

Most Tibetan people are friendly to photographers readily to capture them. However, please respect private situations such as a sky burial or worship ritual and do not even disturb them by approaching.