Tips for Tibet Travel in Winter

Winter is the off-season of Tibet travel. Some attractions, especially those located at the colder regions of Tibet, are closed or not approachable because of the road block resulted from the extreme weather. When it comes to the winter weather of Tibet, the coldness and gales may deter you. But actually, it is much warmer in Tibet than in Beijing in the daytime of winter months. The overnight cold is something we need to be cautious about.

The bright side of winter travel in Tibet is that you can expect lesser crowds and lower travel expense. Moreover, you also get to have some seasonal surprise exclusive to winter, such as bird watching and mountain sightseeing. The migratory birds such as the Black-necked Cranes would fly to the river basin area in Tibet to spend winter; and the rain-free days in winter also promise higher chance of clear views of mountains. The traditional Tibetan New Year is often celebrated in January or February. And that the holy city, Lhasa, is brimming with pilgrims traveling from afar, showcases the most authentic and religious Tibet.

Read on to get the info about winter weather in Tibet and the things you can do.

Imagine of traveling to Tibet in winter, what will first come into your mind, what kind of picture will you conjure up? You might be frowning about the extreme coldness and at the same time anticipate the romantic setting of snow. Well both are partially true, but neither is the actual case for most of Tibet. 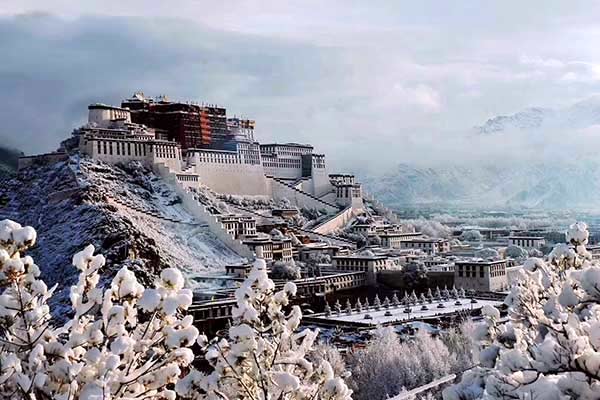 Mainly, Tibet is under the impact of the continental climate, with distinct four seasons and a general low level of humidity. With an average altitude of above 4,000 meters, and such a special geographical location surrounded by mountain ranges in the four directions, the Tibetan Plateau features a very unique climate. Winter of Tibet is characterized by low overnight temperature yet relatively high daytime temperature. So generally, the days in Tibet in winter are warmer than other Northern cities of China, such as Beijing. We can say Tibet is blessed with warm winter. That's why for most domestic travelers, to sunbathe in Lhasa in winter is an appealing winter experience.

But this is the normal case. The exceptions lie in the three regions, which are the Southeast Tibet( Nyingchi, the warmest and moistest region,)；the North Tibet (referring to Nagqu, one of the coldest and driest regions) and the West Tibet (referring to Ngari, one of the coldest and driest regions). In these three regions of Tibet, the average temperatures are either warmer or much colder than the Central Tibet (including Lhasa, Shannan, and part of Shigatse).

Temperatures of the Six Prefecture-level Cities Open to Foreign Travelers

The heavy snows often happen in the higher elevation areas. Lake Namtso, Mount Everest and Mount Kailash, the three top iconic Tibetan attractions, would get huge impact from snowfall in winter. Although theoretically the scenic spots are not closed in winter, they can be occasionally not approachable because of the roadblock due to the risky road conditions.

But in the city area of Lhasa, Shigatse, Nyingchi, or Shannan, it doesn't snow that frequently as we might think.

It is almost rain free during the whole winter in Tibet. Therefore, winter is regarded as a good season to have great unimpeded mountain views.

The wind season of Tibet is from November to May. We can see the whole winter of Tibet is included in the wind month. Therefore, the wind chill might add extra cold. February and March take turns to rank the windiest month. 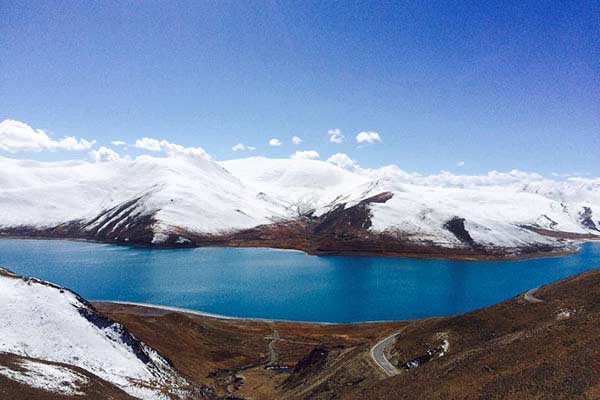 Things to Do while traveling in Tibet in Winter

Winter is great for taking a culture trip, mountain watching, bird watching and more. As many roads in winter can be blanketed by snow, we recommend travelers visiting in this season to tour in or around the cities, towns or hamlets with accommodation and restaurants. It's okay to take an easy hiking or walking around the city. But to visit the remote attractions like Lake Namtso, Mount Everest, Mount Kailash is not advisable in winter.

See the Authentic Tibet with the Devout Pilgrims

Lhasa is a place like home away from home for many Tibetans who reside in other remote areas. After the long terms of planting, care-taking and harvesting of farming, winter is their time to fulfill their dream of a lifetime--the pilgrimage journey to Lhasa or even further to Mount Kailash.

They go through trials and tribulations during the long journey either by trekking or full body prostration, which takes months; and finally reach the holy city Lhasa to conduct their prayer and prostration at the Jokhang Temple. If you travel to Lhasa in winter, you may find yourself immersed in the divine and solemn atmosphere among the pilgrims. If you want to be part of them, you can join the Tibetan people to do clockwise ritual walk outside the Jokhang Temple. 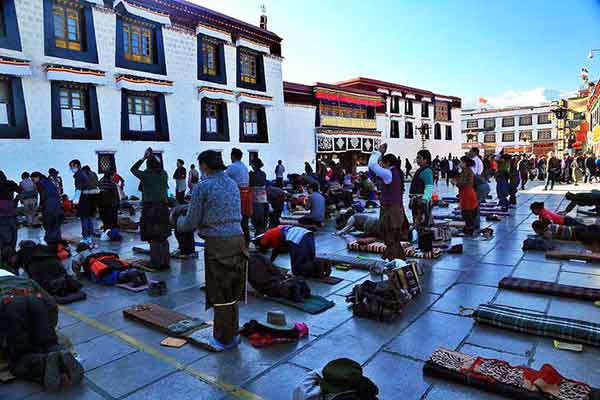 Pilgrims in front of Jokhang Temple

Have a Laid-back Winter Hideaway?

The best way to spend winter is to keep yourself warm and treat yourself with great food. Furthermore, it is the time for relaxation and time with yourself exploring your spiritual world and have some beautiful tranquility.

You can easily get tickets to the top sites such as the Potala Palace and Jokhang Temple in winter, without going through the hassles of making reservation or waiting in long lines. What's more, you can save yourself from peak season crowds and have a comfortable pace to admire the amazing Tibetan architecture, the religious arts, and more.

After the knowledge tour, the best way to dive in the Tibetan lifestyle is to have a cup of tea or a local meal in the eateries scattered in the lanes. If coffee is what you can't do without, you may also find some lovely cafés in Lhasa.

As the day gets shorter in winter, you may have to spend longer time indoors. Although the temperature in the daytime is comfortably warm, the overnight low can be around freezing point. To book a lovely and warm room is a bonus to your winter vacation. Besides, the discounted rate of hotels in winter gives you more reason to book a cozy room in a boutique hotel.

Alcoholic Beverages; Highland Barley Wine, or wine made from highland grapes in Lhasa.

Note: We do not suggest that visitors take alcoholic drinks before they get well acclimatized to the altitude.

Winter Goodies: Tibetan Hot Pot made with yak meat and local specialties is a must try. Vegetarian hot pot is also easy to find. For those fond of spicy food, you should try the street food--the spicy potato (Tibetan style potato wedges). 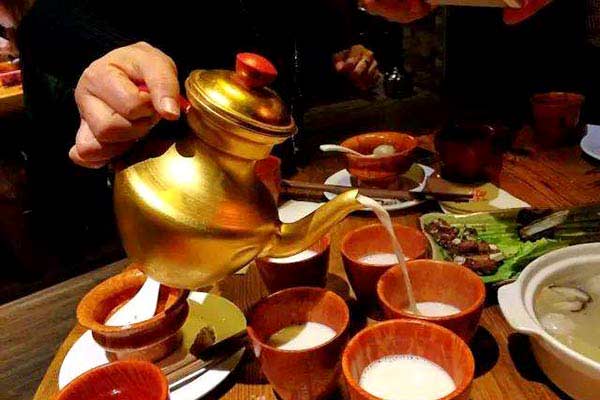 Though it's a little cold to visit the Mount Everest in January and February, Mount Namcha Barwa is more likely to be seen clearly without being veiled in winter.

Headed the list of China's Top Ten Beautiful Mountains by Chinese National Geography, Mount Namcha Barwa, the 15th tallest mountain in the world, with an altitude of 7,782 meters, is endowed with unique beauty. Located in Nyingchi, the southeastern prefecture-level city of Tibet, Mount Namcha Barwa is easy to reach because of the convenient transportation network.

Transport: It is about 90 kilometers away from the Nyingchi Mainling Airport, and 140 kilometers from the seat of Nyingchi, the Bayi Town. You can also travel to Mount Namcha Barwa by taking the G318 national road from Sichuan, reaching Bayi Town first and then finding a great hotel in the nearby villages of Mount Namcha Barwa.

Best time for mountain view: December is a great time to see the peak. As the period from May to November in this region encounters wet and rainy weather, which leaves the peak sheltered or covered by clouds and mist. It says that normally, there are only 56 days in a year when people have captured the clear panoramic view of Mount Namcha Barwa. This rarity also adds mystery to Mount Namcha Barwa.

Birdwatching in Tibet in Winter

Winter migratory birds fly to Lhasa from the late October and normally don't leave until the March or April of the next year. Their winter ground habitats are mainly located in the river basin areas of Yarlung Tsangpo River and its many tributaries, such as Lhasa River, Nyang-chu River (or Nianchu River). Wetlands, lakeshores, river shores, islets are also their favorites.

The most accessible birding spots including parks in Lhasa City, the Lhasa River area, and Linzhou County.

Other Tips for Tibet Travel in Winter