At an average altitude of 4,000 meters above sea level, the Tibetan Plateau is the highest plateau in the world. As a typical feature of high-altitude location, Tibet has thinner air, lower air pressure and less oxygen. Since Tibet is within the middle latitude areas (26°50'～36°53'), even in winter, it gets a lot of solar radiation. Also, about 80% of its rain in a given year occurs at nighttime. Lhasa, the capital city of Tibet, has been granted the name of “city of sunlight” because of all the solar radiation it receives. The annual temperature range is small, while the variation of daily temperature is large between day and night. The dry season (wind season) starts from November and lasts until April of the following year while the rainy season comes around July and August.

Compared with March, April gets 3°C or 4°C warmer and shows a real tint of Tibet spring. Most days in April are sunny and dry. Even though it is still the wind season, the wind is much milder in comparison to the wind conditions in February and March, which means the felt temperature has a smaller difference from the actual temperature. In conclusion, the central parts of Tibet, inclusive of Lhasa, Shigatse, Shannan, would welcome the pleasant spring; the colder northern Tibet (Nagqu) and western Tibet (Ngari) would also become more bearable, referring to the temperature. Nyingchi, the warmest prefecture of Tibet, in April, would turn into a large wild garden teeming with peach blossoms and other refreshing plants.

Lhasa/Shigatse/Shannan (Tsetang): Located in the central region of Tibet, where there is a sense of historical and cultural significance, Lhasa, Shigatse and Shannan (with the largest town of Tsetang) are popular destinations for going on a culture trip and are suitable for visiting all year round based on the relatively clement climate in this region. April is still considered the low season for Tibet travel because there are fewer tourists and reduced travel expenses during this time there. This will definitely make your holiday in April much more pleasant because you won’t need to waste your energy waiting in long lines. For this reason, you’ll have a better chance of having a quality time. 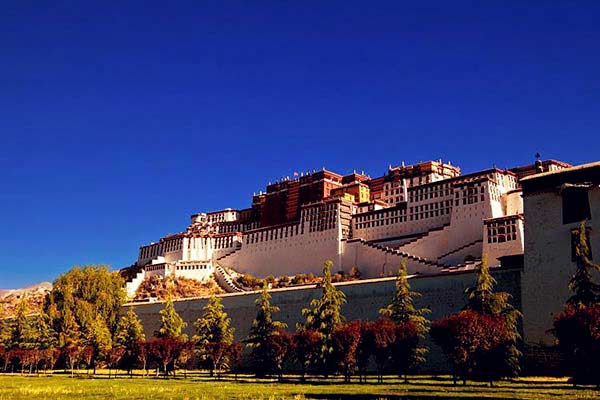 Mount Everest: It is very dry, and it rarely snows. Sunny days dominate the whole month, which means you’ll have a better chance of seeing the peak clearly. Besides, April is also one of the best months for climbing. 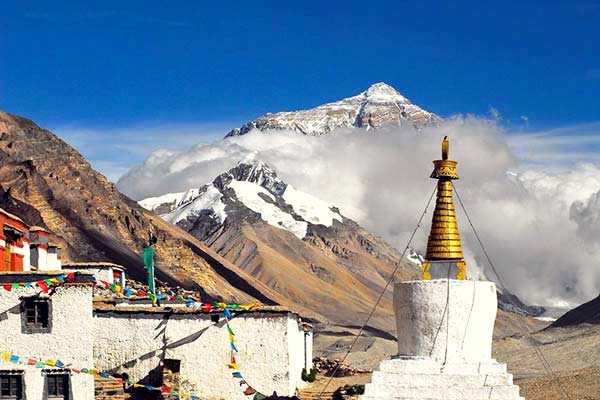 Mount Kailash: Located in the southwest region of Tibet, which is one of Tibet’s coldest regions, Mount Kailash in April is still very cold all day and night. But since the wind gets less harsh and most days are sunny because of spring sunlight, April is a good time for sightseeing and trekking in the Mount Kailash region.

The average temperatures in this region: -7°C~6°C 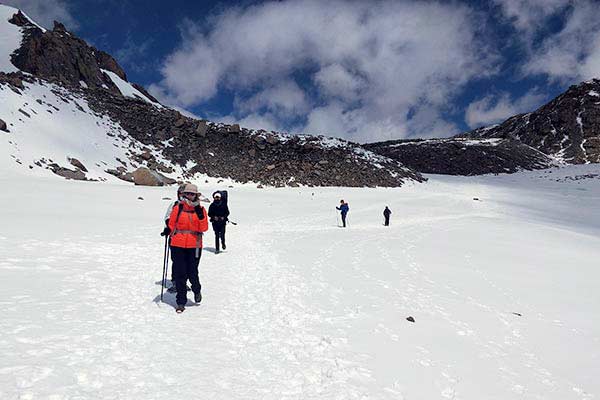 Trek around Mt. Kailash in April

Nyingchi Peach Blossom and the Scenic Spots around:

Nyingchi has the most beautiful spring of Tibet. Every March and April, the peach trees in Nyingchi come into full blossom and decorate the landscape with dreamy light pink. These peach trees grow wildly along the transparently clean rivers, outside the yard of Tibetan households, amid the paths among the barley patches. The natural images randomly and perfectly consist of snowy mountains, evergreen forests, white marshmallow clouds, blue sky, glaciers, and aquamarine-coloured lakes. They are just as beautiful as fairyland.

The average temperatures in Nyingchi: 3°C~17°C

Yamdrok Lake: In April, Yamdrok Lake has completely thawed. There is almost no rain at all throughout this month. You’ll get to see clear skies and a stunningly beautiful lake in varying green colors of azure, turquoise green, dark green, or emerald green due to the movement of the clouds above.

Average temperature: -8°C~7°C
Wind: It can be very windy on the mountain pass.

Namtso Lake: Namtso Lake in April is still partially frozen and won’t thaw completely until May. It is very windy at the lakefront. But with the clear and sunny weather, it is still a good time to visit Namtso Lake in April. The only hazard that should be considered is the roads leading to the Namtso Lake region might be blocked occasionally due to the melting snow.