As Tibet has a large geographical size (1,228,000 sq.km.), different regions in Tibet have distinctively different climate features. Most areas of Tibet are under the influence of continental climate. However, the Nyingchi Prefecture, which is in the southeastern region of Tibet, is affected by the Indian Ocean current. This means it possesses a sub-humid climate.

From southeastern Tibet to northwestern Tibet, the obvious change of landscapes can be observed. You’ll see luxuriant forests and meadows in the southeast, grasslands and steppes in the transitional zone throughout the Lhasa/Shigatse area, and tundra in the remote western and northern areas. Besides that, there is a distinct trend of decreasing rainfall and dropping temperatures from the southeast to the northwest.

In conclusion, Nyingchi is the warmest and moistest area in Tibet, which enables the growth and abundance of forests; the three neighboring cities Lhasa (the capital city), Shigatse (the second largest city), and Shannan (the cradle of ancient Tibet civilization) share very similar climate features. The Ngari Prefecture (in the west) and Ngaqu City (in the north) are the coldest and driest regions of Tibet. 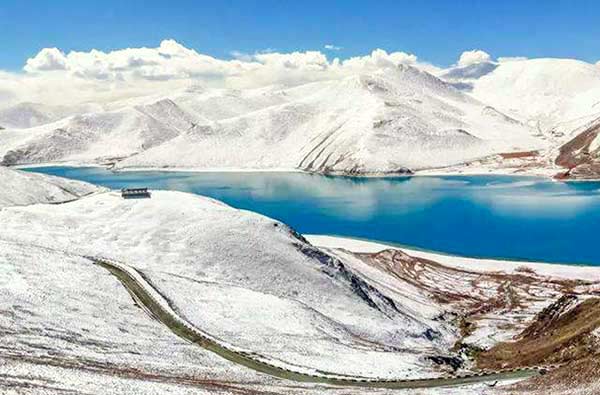 Temperature: February is almost as cold as January in Tibet.

Wind: February and March see the strongest wind of the year in Tibet. So, when the day is heavily windy, the temperature can feel much colder than it actually is.

Clear and Wind Free Days: Similar with January, it barely rains in February. If a day is clear and wind free, the dryness and abundant sunlight make the winter coldness quite bearable. Actually, the daytime temperature in February is much higher than that in Beijing and Shanghai.

Large Temperature Difference between day and night: The daytime in February has experienced a record high temperature of 18°C, while the lowest recorded temperature before sunrise was -7°C. You may have a pleasantly warm day while roaming joyfully outdoors, but then later snuggle closely in your warm room at night to keep away from the frigidity.

Summary: Dryness, coldness and wind chill are the three dominant weather features in February in Tibet. Occasional snow will occur in Lhasa. Roads leading to the northern scenic sites, such as Namtso Lake (in Nagqu City), and to the scenic spots, such as Mount Kailash (in the Ngari Prefecture), are frequently blocked due to heavy snow. Therefore, it’s generally not advisable to travel to these remote regions (where severe weather is also a hazard) in February, but it is recommended to take a historic tour or culture trip because severe weather will have less of an impact on it.

Past Weather Data of Seven Cities in Tibet, China-- February 2018

Note: The above information is collected from historical data and differing weather pattern may occur.

An Encounter with Real Tibet in February

1. Immerge yourself in the authentic Tibet with the most pious people:

In Lhasa, you will find that in February, there are more pilgrims than tourists. Most of them live in other Tibetan-populated areas besides Lhasa. They’ve accomplished their farming or husbandry chores and have traditionally taken the “off season” to do their maybe once-in-a-lifetime pilgrimage journey to Lhasa. These are the most devoted Tibetan people who you’ll find in all the iconic sites, such as the Potala Palace, Jokhang Temple, Ramoche Temple, Sera Monastery, Drepung Monastery, and Barkhor Street, or along the roads leading to Lhasa. 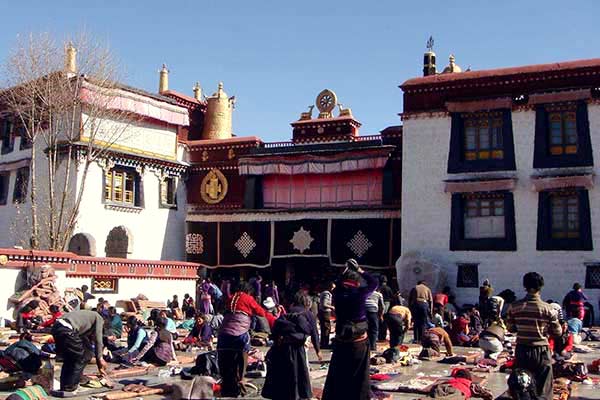 Pilgrims in front of the Jokhang Temple

When the heart tells us it’s time to go, then weather, distance, budget, and other relevant preparation factors turn out to be our second consideration. The name of that very destination just pops into our heads. If Tibet is the place for you, and you need some help with information or guides regarding Tibet travel, then we are always happy to provide our first-hand knowledge about Tibet to those people who are interested. Simply contact us by sending an email to inquiry@gototibet.com.