Weather Condition of Tibet in June

Temperature: Like Spring in Tibet, which is actually one month later than other locations at the same latitude, June, the first summer month in the northern hemisphere, is much cooler than other major cities of inland China. While the temperature of Chengdu, the capital city of the neighboring eastern province of Sichuan, averages between 20°C to 28°C in June, Lhasa has a monthly average temperature ranging from 11°C to 24°C. Therefore, if the heatwave is what you’d like to stay away from, Tibet is definitely a good destination to have a chill summer vacation.

Rainfall and Humidity: The almost seven-month-long wind season ends in May. Late June is the beginning of Tibet’s rainy season. However, it is July and August that see the most rainfall of the year in Tibet. And typically, on the Tibetan Plateau, rain usually occurs at nighttime. Thus, you may still have most of the days in June as sunny, warm, and clear days. Besides, with the increasing rainfall, June is also more humid than May. However, the humidity in Tibet--Lhasa(40%) in June is still at a considerably low level, compared to other major cities like Beijing(61%), Chengdu(77%), and Shanghai(79%).

Conclusion: June is a great time to travel to Tibet because it is when all the beautiful sacred lakes have thawed completely. It is also when the mountain scenery can be appreciated with clear views, and the trekking tour, cycling tour, or overland tour can be experienced during this time before the rainy season.

Past Weather Data of Tibet in June

Disclaimer: The above information is collected from past weather data until 2019. And a differing weather pattern may occur in the future.

Big Events in June and Recommended Destinations Based on Weather

Saga Dawa is one of the most important religious festivals of the Tibetan people. It commemorates the founder of Buddhism, Shakyamuni Buddha. This month-long festival is held in April, according to the Tibetan calendar, which is usually expected to fall in June of the Gregorian Calendar (the widely used one). The climax of the Saga Dawa festivities happens on April 15th (the Tibetan calendar) because of the coincidence that the birth, enlightenment, and nirvana of Shakyamuni Buddha all occurred on this very day. If you travel to Mount Kailash in June, then you could get immersed in the most intense religious atmosphere by witnessing how the most devoted group of people celebrate their big event. 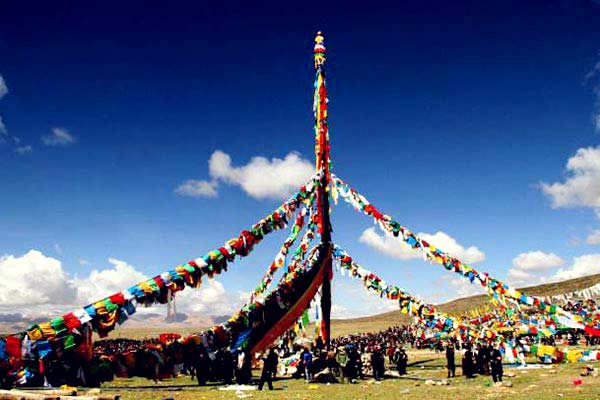 If you’re more into nature and outdoor activities, then you may like the special trekking tour with the 52-kilometer-long trekking route which circles the holiest mountain of the Tibetan people. The trekking at Mount Kailash has another cute name—Mount Kailash Kora, and it often takes 2 or 3 days to finish for tourists. As for the Tibetan people, they could finish the kora in one day because they are definitely more accustomed to the local environment. However, there are pilgrims who would willingly take weeks to conduct the arduous kora by prostrating all the way. They go through hardships of the beautiful yet rugged paths that are made of dirt and gravel, and the wind chills at mountain passes, without ever cutting corners. Every step, every bend, every forehead touching the ground, and every prayer is done with peaceful and firm faith. 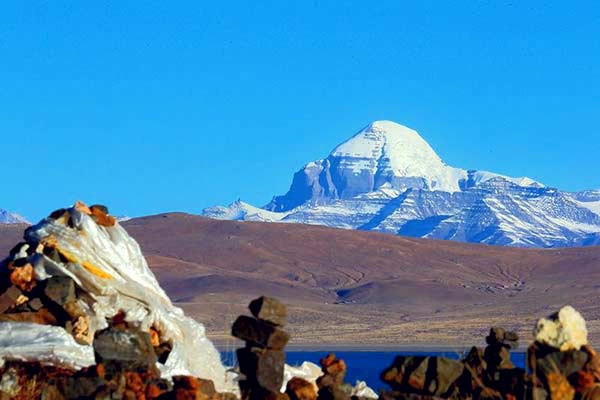 The Pyramid of Mt. Kailash

The recommended time to tour Mount Everest is from the beginning of June to the middle of June because most of the days are sunny during this time period. It is very warm, and the occasional wind gets weaker compared to the winds in May. Depending on the different physiques and different levels of tolerance to coldness, tourists who travel to Mount Everest in June can choose an autumn jacket or down coat. However, please take the large temperature range between the day and night into consideration. The lowest recorded temperature in June at the Everest region was close to the freezing point.

For water lovers, the shimmering lakes in Tibet may be more precious than jewels. The most famous lakes among them are the three sacred lakes. Summer and Autumn are the best time to appreciate their beauty in warm, pleasant weather.

Besides these popular lakes, there are thousands of lakes of different shapes and sizes that are hidden within the massive land of Tibet. To learn more about the other unique lakes, you can go to our Geography of Tibet page: Lakes in Central Tibet. 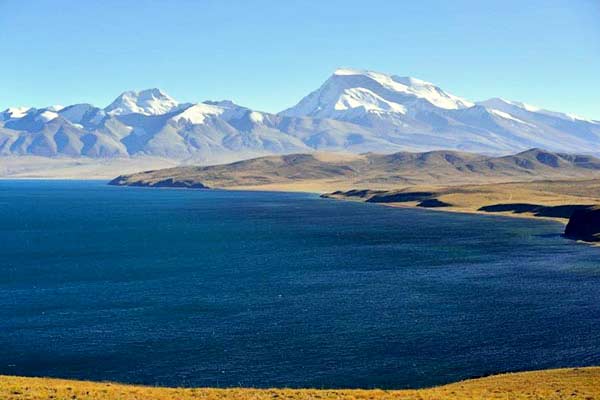 Every May, the subtropical climate starts to bring back the warm and moist weather to the southeastern part of Tibet. Alpine flowers, azalea, blue pretty poppy, all of a sudden come into wakefulness and bloom dazzlingly in Nyingchi. They may never expect to be discovered and praised for their beauty. After enduring the long winter and waiting patiently in the spring, they finally come during the most beautiful season.

Shannan City, within short reach of Lhasa to the east, is the cradle of ancient Tibetan civilization. It is where the first Tibetan palace, the Yungbulakang Palace, was located. In June, the highland barley growing in the patches underneath the mighty palace gets ripe and turns a shiny yellow color. Local Tibetans start to get busy with harvesting, which makes June the perfect time to experience the farming life of Tibet. Meanwhile, you’ll have a historical trip to see ancient Tibet.