Temperature in General: In October, the central areas of Tibet, where many big towns are concentrated (i.e. Lhasa, Shigatse, Nyingchi and Shannan), are still pleasantly warm in the daytime with an average high of ten and can drop below freezing or hover around 0°C to 5°C during the nighttime and early morning. The two coldest regions, Nagqu and Ngari have average temperatures ranging from -6 to 8 degrees Celsius, and -15°C to 2°C respectively.

Rainfall, Snowfall and Humidity: September has seen the ending of Tibet’s rainy season. October has almost no rainfall in most areas of Tibet and even in the moistest region, Nyingchi, the average precipitation figure is only about 40mm. The wind season which normally starts from November is also one month away. Except in the Ngari and Nagqu where heavy snow starts to get more frequent in October, most of Tibet is snow-free as well.

Humidity, in comparison to that in the rainy season, would plummet to only 22% to 58%, averaging at around 38.8% throughout the whole Tibet Autonomous Region. It is about 20% lower than the ideal amount for human body comfort. Therefore, extra attention should be taken to keep your skin hydrated.

Conclusion: Based on above, October can be the last best month to have a Tibet trip before the severe coldness, heavy wind and snow befall on Tibet. But you must be cautious about the extreme weather conditions that happen to the roads leading to Nagqu, Ngari and the Mount Everest region.

Disclaimer:
The above information is collected from past weather data mainly from 2018 or 2019. A different weather pattern may occur in the future.

Weather at Main Attractions in October

The October temperature at Tibet’s side Everest Base Camp averages from -7°C to 12°C. It hardly rains in October at the Everest region. Most days are almost cloud-free and sunny, which makes it a great time to have a clear panoramic view of the peak.

Nighttime Clothing Essentials: Besides the above daytime clothing, a heavy down coat is smart to pack in order to fight the nighttime coldness.

Snowfall: Normally, it starts to snow in October at the Mount Kailash region. Though it is doable to travel to Mount Kailash for the first ten-day period of October, for the mid October and late October, the temperature drops to well below 0°C and can get teeth chattering cold, especially at the high mountain passes in the daytime and nighttime. For Tibetan pilgrims, visiting Mount Kailash, the holiest mountain in their religion, is a lifetime experience they would not miss. If you tour Mount Kailash in October, then you will possibly find that many of the people you’ll encounter during this cold month are Tibetan pilgrims who travel from afar. They are not normal tourists. 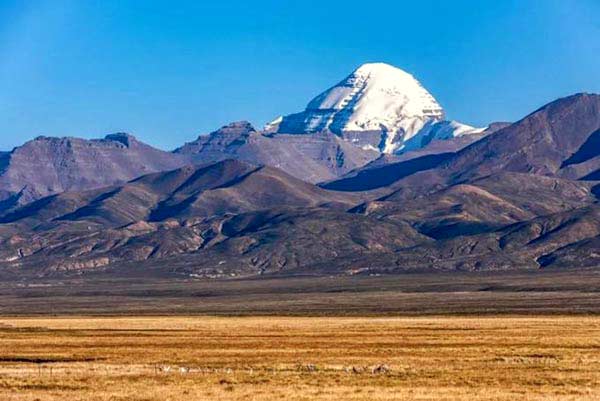 As one of the three most famous sacred lakes in Tibet, Yamdrok Lake is also the one that is easiest to reach from Lhasa, although it is under the jurisdiction of the Shannan Prefecture where it is home to the civilization of ancient Tibet. Therefore, the weather conditions of Yamdrok Lake can be referred to from that in Gyantse, Shannan.

The temperature at Yamdrok Lake in October ranges from 2°C to 18°C. Rainfall is rare in October and in addition to the low humidity in this window time between the rainy season and wind season, the sky is mostly clear and almost cloudless. Snowy-capped Mount Nojin Kangsang stands solemnly in the background, as though he was truly the loyal guardian of the pretty Yamdrok. The ground vegetation on the closer mountains surrounding the lake turn brown in October. Yamdrok herself is heart-touching, deep blue in the clear days, so you will find it hard to describe how beautiful the natural color is.

Also loved and revered as the sacred lake by Tibetan people, Namtso Lake is in the coldest region of Tibet, Ngari. Same with Yamdrok Lake, Namtso is also popular among tourists who love waters. Both are among the most visited lakes in Tibet, and many people have different opinions about which one is more beautiful. More often, they are equally loved and praised.

Similar to the situation of Mount Kailash, Namtso Lake usually won’t be suitable to visit after October because of the upcoming heavy snowfalls and the subsequent icy condition on the roads.

The temperatures in October in Namtso Lake region can fall to -15°C. The highest daily temperature is a low single-digit temperature. If your schedule is only available in October, then try to make it before the mid-month and get prepared for a possible roadblock that could lead to an inevitable cancellation of the trip.

In conclusion, the first 10 days of October are worth a try to visit Namtso Lake, but mid-October and late October are not recommended.

Related articles
Tibet Weather in November As the early winter in Tibet, November has the comfortable temperatures ranging from -5°C to 12°C, with dryer and clearer weather. You’ll feel warm in daytime because of the bright sunshine on the plateau as always!
Tibet Weather in December In December, the temperatures drop as low as -9°C at night. But you’ll also enjoy agreeable sunny weather during the day, with the highest temperature up to 9°C. A moderate tour in central Tibet would be a good choice.
Tibet Weather in September Rainy season comes to an end from this month, and the weather is delightfully cool. Grab the last chance to travel to Tibet before Tibet gets cold. Just be aware of the huge temperature difference between day and night.
Tibet Weather in August Summer continues in August. You’ll enjoy a warm and pleasurable weather while traveling in Tibet. On the other hand, August has the heaviest rainfall throughout the year, so an umbrella should be in your packing list.
Tibet Weather in July Here summer comes! The temperature can get as high as 23°C in daytime. However, it will drop below 10°C at night. So, don’t forget to bring a jacket or sweater for nights. A down coat is also needed for the Everest tour.
Tibet Weather in June June is a pleasant month for all routes in Tibet. Monsoon season hasn’t come yet, so you’ll still have a big chance to have a stunning view of the Everest peak. At the same time, it’s also good for a tour to Mount Kailash.