Weather Condition of Tibet in September

Located on the world’s highest plateau, Tibet has a unique climate. Tibet has a long winter which usually starts in November and lasts till March. And regardless of the seasons, the weather constantly changes in one day. The temperature difference between day and night is dramatic. The Tibetan saying of “four seasons in one day” is not an exaggeration. Therefore, no matter which month you plan to travel to Tibet, it is necessary to pack layers of clothing for all seasons so that you can have the best possible time concentrating on your Tibet trip.

September brings the autumn color to Tibet. Regardless of the trees in Lhasa, or the grasslands on the hillsides beside Yamdrok Lake, or more obviously in the forests of the southeastern Tibet, the Nyingchi area, the summer delicate green of the plants starts to get a warm tint.

The average temperature in the whole Tibet region ranges from 5.1°C to 18°C. In the city areas (such as Lhasa, Shigatse, Shannan or Nyingchi) where the average altitude is around 3,000 to 4,000 meters above sea level, a light autumn jumper or T-shirt and jeans would do for young travelers or people who basically have a greater tolerance to coldness. In the nighttime, a light down jacket or coat would be called for almost everyone if you would take a stroll to feel the nightlife of local Tibetan and see the starry sky outdoors.

Humidity in September throughout most of Tibet is still very pleasant, based on human body comfort. The average figure for humidity is 51%, which is about 6% lower than in August, but still quite ideal. The rainy season almost comes to an end in early September. Therefore, traveling for mountain views would be more recommended after the middle of September.

In conclusion, September is a great time for all the themes of Tibet travel, based on weather.

Disclaimer:
The above information is collected from past weather data, mainly from 2018 or 2019. A differing weather pattern may occur in the future.

Clothing Tips:
Based on the feedback from our previous guests and my own experiences, to keep yourself toasty warm is still the most important clothing consideration that you can make. You’ll have no problem if you just stick to big towns and take a cultural trip which mainly happens indoors. And if you happen not to pack warm clothing, then it’s easy to do shopping in Lhasa or other big towns. But if you have a plan to go further to Yamdrok Lake, Namtso Lake, Mount Everest, or Mount Kailash, and other remote attractions, you’ll have some teeth chattering moments, especially at the mountain passes where wind may get you regret that your down coats were not with you.

FYI, our guests who traveled to Tibet in September, (from head to toe) wore hat/beanie/cap, sunglasses, scarf/shawl/neckerchief, jacket or windproof jacket/light down coat, jeans/leggings, mountain shoes.

What Are the Top Tibetan Attractions Like in September?

In China, September is the month for the new semester. Tibet would have seen a large number of student visitors. The longest public holiday, China’s National Day Holiday from October 1st to October 7th has not brought the most tourists of the year to Tibet. With the weather still warm and mild, and with a relatively smaller number of visitors, September is the most ideal month for taking a cultural trip in the city areas of central Tibet (Lhasa, Shigatse, Shannan, Nyingchi). 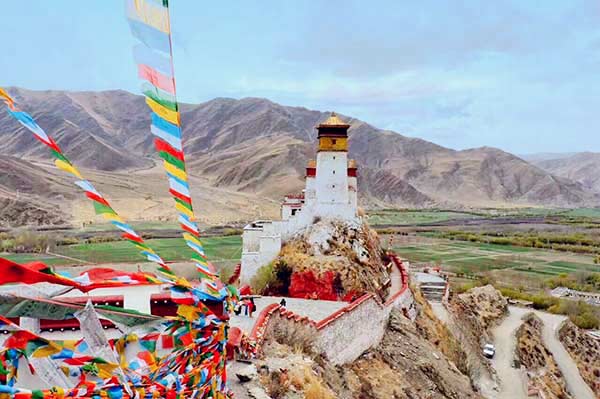 It is amazing how the highest plateau, where rainfall is not abundant, nurtures thousands of stunning lakes. Each of them is uniquely pretty, and many of them have their own mysterious stories.

Yamdrok Lake and Namtso Lake can both be reached easily from Lhasa. Yamdrok Lake is basically suitable to visit all year round. Namtso Lake, located in a relatively more remote area, is ideal for visiting from May to September. The rainy season almost comes to an end in September, and the winter coldness has not come yet. Heavy snow on the way from Lhasa to Namtso still happens but less frequently. September is actually the last month of the year that we would recommend traveling to Namtso Lake.

Note: For environmental protection needs, it is no longer possible for tourists to stay overnight at the hotels of the lakefront of Namtso since April 2019. Tourists who’d like to see the sunset at Namtso Lake and need overnight accommodation can go to the nearest town Damxung, which is only 60 kilometers away. 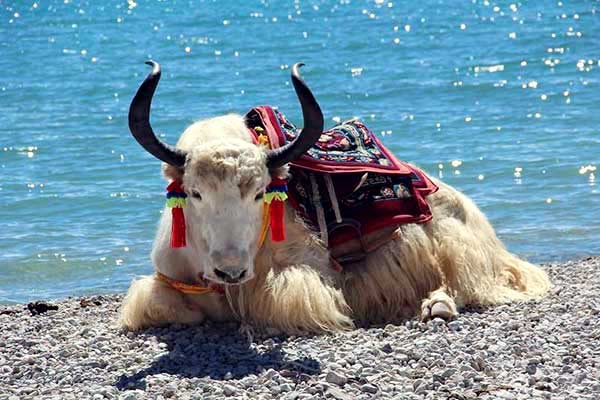 A White Yak by the side of Namtso Lake

No matter for sightseeing, trekking, photographing or even climbing Tibet’s mountain attractions, September is a great time to fulfil your dreams. The warm, mild and relatively stable weather conditions of September enable a higher chance of success for your outdoor exploration on this rugged yet pretty landscape.

As the holiest mountain for all the Tibetan people, Mount Kailash trekking is popular among the devoted pilgrims and trekkers from all the world. Do not miss the chance to feel the authentic religious Tibet or the fantastic 52km kora of trekking route at Mount Kailash.

What is it like to be near the highest peak in the world? It is a mixture of “just go and check it out.” September is a safe time for visitors to fulfill their Everest dream, based on current weather conditions. Rare rain promises good road conditions and clear days hardly let you down without treating you to an amazing panoramic view of the peak from the Everest Base Camp. 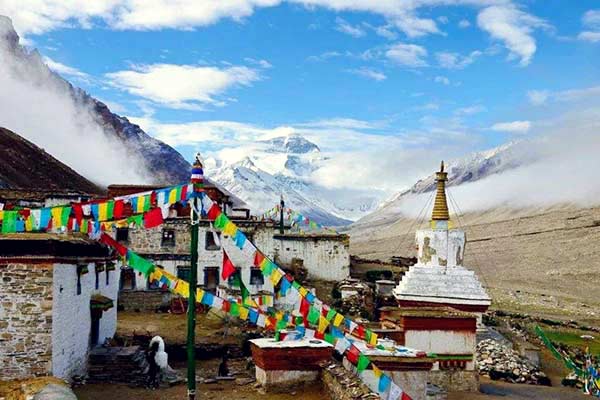 Mount Namcha Barwa is the highest peak in the eastern region of the Himalayas. It is 7,782 meters high. What makes it special and attractive is not the height but the magnificent and delicate beautifulness of itself. Located in the southeastern region of Tibet, under the jurisdiction of Nyingchi Tibet, Namcha Barwa is the highlight of an everchanging painting of the surrounding natural environment. Spring peach blossoms dot pink into the painting; summer green and summery alpine flowers tender the grandeur quietly; autumn-coloured forests in September just give you another kind of surprise that awaits your finding.

What’s special about September: The highland barley welcomes the harvest in mid-September. The Tibetan people still keep the tradition of celebrating the harvest by holding the Ongkor Festival. If you’re interested in the agriculture of Tibet, you should visit during September.

Related articles
Tibet Weather in November As the early winter in Tibet, November has the comfortable temperatures ranging from -5°C to 12°C, with dryer and clearer weather. You’ll feel warm in daytime because of the bright sunshine on the plateau as always!
Tibet Weather in December In December, the temperatures drop as low as -9°C at night. But you’ll also enjoy agreeable sunny weather during the day, with the highest temperature up to 9°C. A moderate tour in central Tibet would be a good choice.
Tibet Weather in October With the highest temperature up to 17°C, October is still a great time for Tibet travel. Sun cream is essential as the UV rays are strong all year around. Snows may block the way to remote areas from end of the month.
Tibet Weather in August Summer continues in August. You’ll enjoy a warm and pleasurable weather while traveling in Tibet. On the other hand, August has the heaviest rainfall throughout the year, so an umbrella should be in your packing list.
Tibet Weather in July Here summer comes! The temperature can get as high as 23°C in daytime. However, it will drop below 10°C at night. So, don’t forget to bring a jacket or sweater for nights. A down coat is also needed for the Everest tour.
Tibet Weather in June June is a pleasant month for all routes in Tibet. Monsoon season hasn’t come yet, so you’ll still have a big chance to have a stunning view of the Everest peak. At the same time, it’s also good for a tour to Mount Kailash.