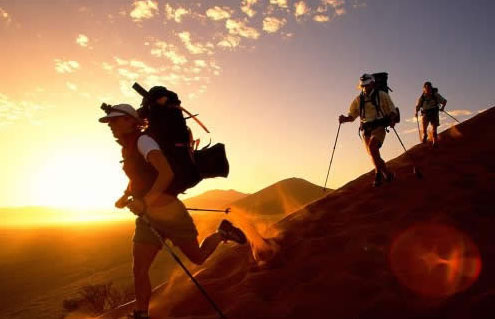 This Sierra Club adage “Take only pictures, leave only footprints” is an appropriate philosophy for preserving Tibet’s wilderness. While the vast herds of rangeland animals have been greatly reduced over the last several decades, logging interests continue to pressure the virgin forests, and new mineral deposits are exploited every year, Tibet is probably the least spoiled region along the Himalaya. The low population has much to do with this, but so has the delayed introduction of tourism. The trails in Tibet are surprisingly litter-free, even along the popular routes near Samye monastery and Mount Everest, with the main exception being the Dza Rongphu/ Everest base camp area.

It should go without saying that you are not to leave garbage at your campsites. Cigarette butts are so bad as other types of litter once they are on the ground. Put them in your pocket. When you have a bowel movement, dig a shadow hole or scrape away some dirt, then be like a cat and cover up what you deposit. Burn your toilet paper or carry it out; don’t just bury or hide it. Unfold the paper before burning; a cigarette lighter works best. Light it from the bottom, allowing the flame to go upwards. If the paper is wadded into a ball it won’t burn properly. When the flame is out,  knock them apart. Feminine hygiene products do not burn well. Wrap them in toilet paper and store in a plastic bag until the trek is over.

Commercial trekking companies should provide a toilet tent, which is pitched over a hole in the ground. Make sure your trek staff has a shovel or ice ax, since the ground tends to be hard and rocky. Toilet tents should be 150 feet (45m) or more from any streams. Don’t let the staff dig the hole in the middle of a beautiful meadow; the scar could last for decades. If there is turf, have your staff cut a net block of sod that can be replaced over the hole. Ideally, collect used toilet paper (each day i hang a new plastic bag inside the toilet tent) and pack it out with other camp garbage. The next best method is to have each person burn toilet paper in the toilet tent. Don’t put toilet paper or other trash into the toilet hole--animals and curious herders often dig up these holes, scatter the paper. When you are finished, kick a bit of dirt over your business. Each morning after breaking camp, have someone in your group stay back to check if the toilet hole has been properly filled in, nut just partially covered with a big rock. This a common problem throughout the Himalaya.

Pay attention to how your staff handles the trek garbage. Hiding cans and bottles in the bushes or under rocks is not acceptable, nor is burying the solution. If your pack animals can carry full containers of food in, they can haul empty ones out. Some trek staff may resist this idea, saying the yak or horse men won’t agree, but work with your trek guide to make sure your trash is packed out. Food scraps can often be fed to yaks, or else be carried out along with the other garbage, preferably in a plastic-lined sack or duffel bag. On commercial trecks, don’t have your staff burn any trash. Wet paper, plastic, and foil-lined packets are near impossible to burn, even when doused with fuel, and the resulting burn scar will remain for months, even years.

Children sometimes come to camp or a lunch stop begging for empty containers. While bottles with tops can be used for storage, pop-top soft drink or beer cans will merely be used as playthings until the novelty wears off, then get discarded. Crush all cans after use to pr event this indirect forms of littering. Wherever you camp, try to leave the site in better condition than you arrived. If paper or trash is around, pack it out with the garbage from your trek. If you are camped in an area where bushes or trees grow, encourage your staff to use their kerosene stoves instead of the local wood.

Washing your clothes or body will inevitably introduce soap into the streams. To minimize your impact, use a wash basin 15 feet (5 m) or more from the water’s edge. Toss the soapy water away from the stream, then refill with more water. Have your trek staff do the same, and ask them not to wash dishes in streams or lakes. Biodegradable soap is not common in Asia.