What to Wear in Four Seasons in Tibet

Tibet has attracted domestic and international tourists because of its unique plateau landscape and rarely-known ethical culture. Called the Roof of World, the Tibetan Plateau, has its own climate and weather due to its geographical location and high elevation. The entire Tibet Autonomous Region is situated on the plateau, of which the weather in one day can vary so differently that it has generated a saying "Four seasons coexist in one day and one day sees dramatically variable weather patterns.".

Given that the weather is changeable, what shall we wear travelling to Tibet? How can we make the clothing packing wisely light-weighted and also functional? Let's have a quick glance at the weather conditions of the four seasons in Tibet and our clothing tips for each.

Spring (March to May)

The early spring sees slowly rising temperature. In cities at elevation below 4,000 meters, the daily average high reaches 12 degrees Celsius in March, 15 in April and 19 in May, while in higher elevation area, the mountain passes still encounter occasional snow and the lake frozen in winter starts to thaw in late March and usually completely melt in late May. March is one of the windiest months in Tibet. The heavy winds make the actual temperature feels much colder. A beanie, neckerchief, and wind-proof coat are suggested. 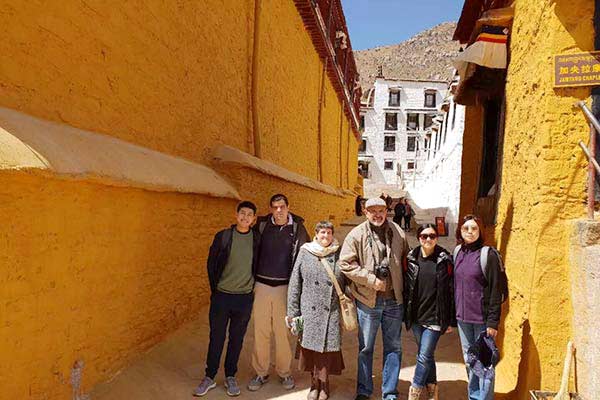 Tourists in Lhasa in April

Summer is the warmest season in Tibet and brings the most rainfall in a year. Rains often happen in the nighttime, so, it has little impact on the outdoor activates. However, rains also make the road condition a little riskier with the higher chance of landslide, and land avalanche, lower visuality. In Lhasa, or other towns like Shigatse and Ningchi, the daily average high in summer ranges from 20 to 22 degrees Celsius, while the daily average low is from 9 to 10 degrees Celsius. It feels not hot at all but comfortably cool. For some people who have higher tolerance of cold, they can wear just one T-shirt and knee-above trousers at noon. But if your travel plan includes Mount Everest, Namtso Lake, or any attraction with mountain pass where heavy wind is frequent, a winter coat is still a must-have. 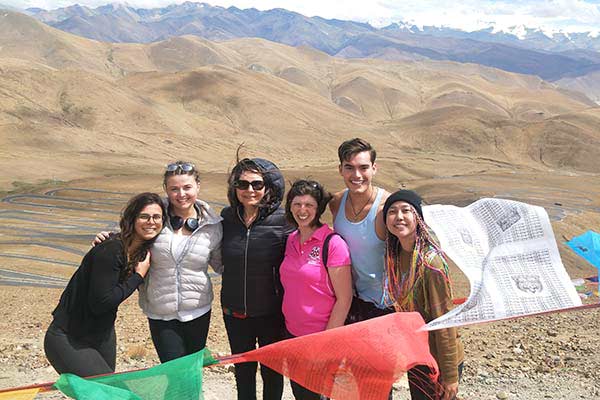 Tourists on the way to Shigatse in July

Rains have almost left the Tibetan Plateau after the steps of summer. From September to November, the temperature drops by 5 degrees Celsius each month. The average high in September is about 20℃, by October it is 16℃; and by November it is 11℃. In the mornings and evenings, the lowest ranges from -5 to 1 degrees Celsius. It feels even colder when there is wind. So, to keep yourself properly warm should still have your priority of clothing tips in autumn. 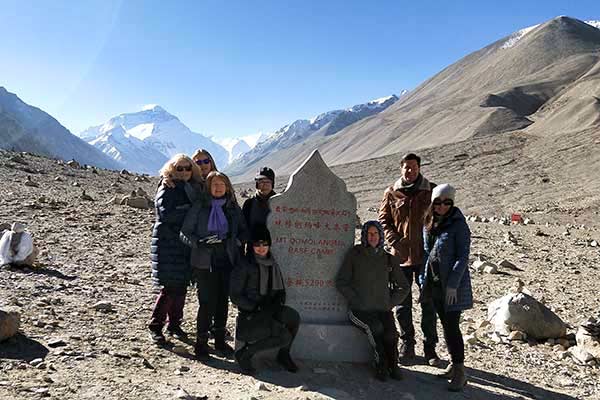 Tourists at Everest Base Camp in October

The average high temperature in Lhasa is from 7 to 9 degrees Celsius, while the average low is only -10 to -7 degrees Celsius. It is seriously cold. Heavy snows happen frequently from October and the road condition becomes unstable. Lower visuality and slippery surface makes traveling to the remote areas a bit dangerous. Warm clothing with windproof and waterproof functions is most handy. Shoes with high boots to keep your ankles warm and with windproof surface are highly recommended. 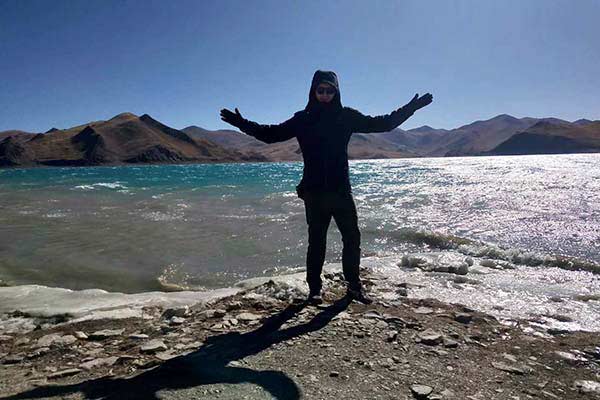 A Tourist at the shore of Yamdrok Lake in January

As mentioned above, weather in one day varies distinctly. No matter which season you're traveling to Tibet, layered clothing, a warm coat and a good pair of shoes are packing essentials. Summer is mildly warm and winter is pleasantly warm in the daytime of Tibet, which makes Tibet a good place to escape hot wave and have a nice winter hideaway with enjoyable sunbathing experience.

Tops: A warm coat or jacket, or sportswear with inner lining to maintain warmth is a must-have for all seasons; Windproof or rainproof is a bonus; Layered clothing including sweater or thermo suits are wise as they can be easily removed or put back on when temperature changes within a day.

Bottoms: We suggest autumn or winter trousers that are bendy and suitable for walking.

Underwear: For the protection of environment, we don't suggest disposable underwear, but quick-dry is a good choice for traveling.

Shoes: Hard-bottom outdoor shoes are suggested; If you travel to Mount Everest, or trek/hike outdoors, shoes with high boots are better to prevent the dirt or gravels entering into the shoes;

What we don't suggest: cotton clothing is not a wise option in Tibet. It can take ages to dry up.

Wildlife Bird-watching Clothing Tips: To not scare the animals and birds, light colored clothing is advised.

Outdoor activity clothing tips: Bright colored wear is suggested for the safety of people as it will be easier to spot and locate those who get lost in the wild.

Other Clothing and Packing Tips