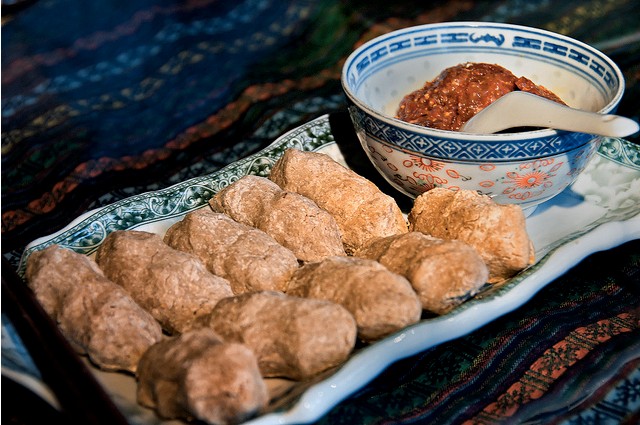 Zamba, was spelled tsampa; it is made from roasted flour called nas, mixed and rolled into balls with the fingers of the right hand. It is often eaten when having tea. Once when visiting a Tibetan family in Qinghai, they worried that Americans do not like thick beverages and so the tea served us on that occasion was thin and called boeja. It was loaded with butter and salt and milk, even some cream, and many in the room put their finger around the edge of the cup and rubbed the butter fat on the sides of their noses, their foreheads and on other dry skin places.

That day, there was little zamba--no balls of roasted flour in sight. As is common in families, it came after several cups of tea were downed; and when it did, we each prepared our own. My ineptness generated the dozen people in the house to individually provide a lesson on technique. Not all were similar but the results were as if made by machine, perfectly round and all the same size, that of a small walnut.

On that occasion, I was asked to make at least five extra balls, as were the others there, to be boiled later with large bones, chunks of meat and some vegetables. This was dinner for that night, served with more zamba to be made, if wanted, along with butter-tea, large yak rib bones with little meat on them, some dried milk residue that looked like dark sweepings but that they called cheese (chura), and lots of qingke wine. All solids were eaten with the right hand, a difficult task for this lefty, or if liquid, they ate them using a wooden spoon. When drinking, we said gambei (which translates to bottoms up) and at least half of the people emptied the tiny one-to-two ounce cup each time.

When eating Tsamba, Tibetan people put some ghee in a bowl, pour some boiled water into the bowl, then put some roasted flour into the water, and mix them with one hand. When mixing the tea, they press the flour slightly against the edge of the bowl with their fingers to avoid spilling the tea. After mixing all the roasted flour, the tea and the ghee until the thing gets thick, people knead it into dough balls and eat them.

The Tibetan people often bring barley flour with them in small leather bags when they leave home to do business.

Related articles
Monks and Nuns in Tibet A lot of people are quite courious about the life of the monks in Tibet."Monks and nuns who are within the range of the approved posts each will get a subsidy o
The Beautiful Lady's fantastic tour The Mt. Everest standing in the distance, surrounded by the clouds.On thier way back to Shigatse they found a family living in this nomad tent.Ms. Maya was so e
Area of lakes expanding in Qinghai-Tibet plateau The global warming caused the area of inland lakes in the Qinghai-Tibet plateau expand 26 percent in the past 20 years
Tibetans and the religion Once you are in Tibet, you could see lots of Tibetans pray in from of the monasteries or temples.
Demolition of Guangming Teahouse in Lhasa Guangming Teahouse used to be a well-known old brand teahouse. Sadly the demolition of Guangming Teahouse is a major event in the lives of locals recent days.
Tibetan Horse Racing Festival Horse racing has always been one of the favorite sports of Tibetan people. And nowadays, horse racing festival held in summer has become a window to understand Tibetan culture.